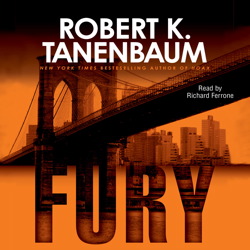 The seventeenth book in the bestselling Butch Karp series opens in Brooklyn, with the brutal rape of a female jogger whose assailants are convicted and later exonerated. Now, the guilty are filing a multi million-dollar lawsuit against the city of New York, the police, and the two assistant DAs who tried the case. While the police and the criminal justice system are under media assault, Karp has suspicions that there is corruption within his own office. Karp and Marlene are on a mission to restore the system’s lost dignity, bring the rapists to justice, and destroy the terrorist cell that threatens the city. All the while, terrorists are planning to blow the roof off Times Square on New Year's Eve. As Karp looks more deeply into how the system appears to be undermined, he unearths a tangled web involving corruption, courtroom confrontations and conscience. Fans of Butch Karp, as well as the classic New York crime drama, will find plenty to sink their teeth into with Fury.