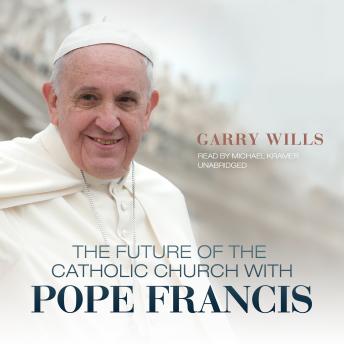 The Future of the Catholic Church with Pope Francis

New York Timesbestselling historian Garry Wills takes on a pressing question in modernreligion-will Pope Francis embrace change?
Pope Francis, the first Jesuit pope and the first from theAmericas, offers a challenge to his church. Can he bring about significantchange? Should he?
Garry Wills argues that changes have been the evidence oflife in the Catholic Church. It has often changed, sometimes with badconsequences, more often with good-good enough to make it perdure. In thisbrilliant and incisive study, he gives seven examples of deep and seriouschanges that have taken place within the last century. None of them was effectedby the pope all by himself.
As Wills contends, it is only by examining the history ofthe church that we can understand thechallenges facing both it and Francis,and as history shows, any changes that meet those challenges will have impactonly if the church, the people of God, support them. In reading the church'shistory, Wills considers the lessons Pope Francis seems to have learned. Thechallenge that Francis offers the church is its ability to undertake newspiritual adventures, making it a poor church for the poor, after the exampleof Jesus.

Future of the Catholic Church with Pope Francis