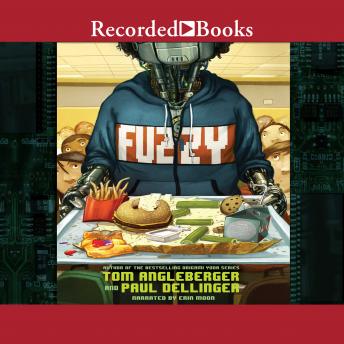 In this sci-fi middle school adventure by the New York Times bestselling author of the Origami Yoda series, one girl and one robot team up to save their school From the minds of Tom Angleberger, the New York Times bestselling author of the wildly popular Origami Yoda series, and Paul Dellinger, an adult science-fiction writer, comes a funny middle school story with a memorable robot title character. Reluctant readers and robot lovers in elementary and middle school will enjoy this fast-paced read that shows just how strange a place middle school can be, particularly when the new student is a state-of-the-art robot. When Max-Maxine Zealster-befriends her new robot classmate Fuzzy, part of Vanguard One Middle School's new Robot Integration Program, she helps him learn everything he needs to know about surviving middle school-the good, the bad, and the really, really, ugly. Little do they know that surviving sixth grade is going to become a true matter of life and death, because Vanguard has an evil presence at its heart: a digital student evaluation system named BARBARA that might be taking its mission to shape the perfect student to extremes! With a strong female main character who will appeal to all readers, Tom Angleberger and Paul Dellinger's new novel offers readers a fresh take on robots. Fuzzy will find its place in the emerging category of bestselling books featuring robots, including Jon Scieszka' s Frank Einstein series and James Patterson's House of Robots.