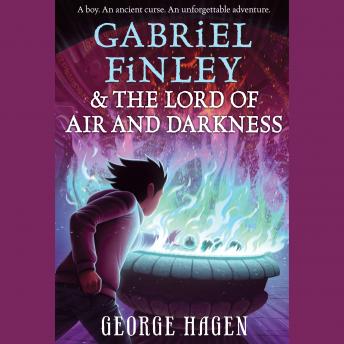 Gabriel Finley and the Lord of Air and Darkness

This exciting, emotionally rich middle grade fantasy continues the adventures of  Gabriel Finley and the Raven's Riddle—which has been compared to Harry Potter, The Mysterious Benedict Society, and Phillip Pullman's His Dark Materials.

Gabriel Finley is longing to find his mother, who vanished without a trace when he was just a baby. Along with Gabriel's raven, Paladin—with whom he has a magical bond that enables them to become one creature and FLY!—and his three friends, he ventures back to the ruined underground city of Aviopolis to free her from the rune in which she has been imprisoned. But Aviopolis is home to Corax, the Lord of Air and Darkness, who is also Gabriel's uncle. And before Tabitha Finley is released, Gabriel must answer a riddle...or else be imprisoned for eternity within a rune himself.

Praise for Gabriel Finley and the Raven's Riddle:
'Both startling and moving—a vivid, compelling fantasy.' —Norton Juster, author of The Phantom Tollbooth

'A great read for fantasy lovers who have worn out their copies of Harry Potter.' —School Library Journal, Starred

'Not to be missed.' —Publishers Weekly, Starred

Gabriel Finley and the Lord of Air and Darkness