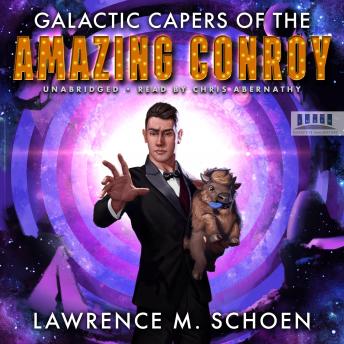 Galactic Capers of the Amazing Conroy

He came for the barbecue, but he found a little girl in need of help. Can his hypnotic skill save her from an uncontrollable power that has her marked for death?

A hypnotist, his alien companion animal, and a little girl with terrifying abilities. Also, a barbecue festival.

What could possibly go wrong?

The Amazing Conroy travels to the edge of Human Space to attend the best barbecue competition in the galaxy.

A five billion year alien vendetta. The truth of the Mayan calendar revealed.

What does a CEO of a billion-dollar corporation do for vacation? He goes back to his gig as a stage hypnotist.

But when a fan/stalker shows up backstage, chaos erupts and Reggie the buffalito is taken hostage!

A black-market auction for a bottle of the galaxy's most unobtainable liqueur lures Conroy.

In the company of his oldest friend, he'll defend himself against a mad bomber, acquire a new enemy with mental powers, and attempt to broker a deal with a really smelly alien.

TRIAL OF THE CENTURY

What wouldn't you do to save your best friend?

The Amazing Conroy has left the corporate world behind and fled Earth.

Now Reggie is dying and the buffalito’s internal nuclear furnace is growing unstable.

Their only hope lies with the Arconi, the same aliens Conroy robbed to create his empire.