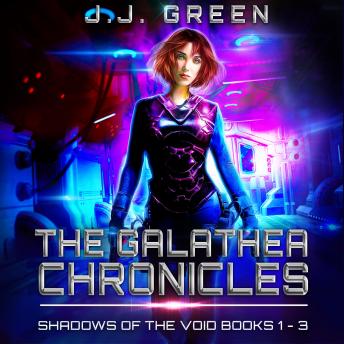 The Galathea Chronicles: Shadows of the Void Books 1 - 3

Growing up as a Martian on Earth has left Jas Harrington solitary, quick-tempered, and with zero tolerance for fools. All plus points when working as chief security officer aboard prospecting starships.

Jas' latest berth is aboard the Galathea, which trawls the reaches of the galaxy seeking precious minerals and rare resources. She thinks it's a routine trip. She's wrong.

An inspection of a far-flung planet leaves Jas suspicious that there's more to the place than meets the eye. If only she could convince the captain of the need for caution, but she might as well wish for a tasty meal in the ship's canteen.

When the captain disciplines Jas for insubordination, she has only two allies: a timid navigator and the second pilot, who has the hots for her. Not that Jas notices.

All hell breaks loose, and Jas' skills are put to the ultimate test. Can she enlist the help of the only two friends she has? She's in a race against time to prevent the aliens from achieving their goal: Generation.

If she fails, the ship's crew, the galactic empire, and humanity itself are at risk.

The Galathea Chronicles is a box set of books one to three in the fast-paced, action-packed Shadows of the Void space opera.