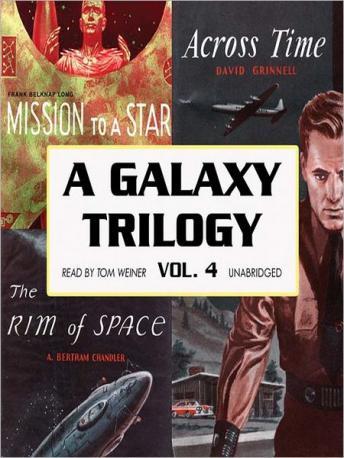 A Galaxy Trilogy, Volume 4: Across Time, Mission to a Star, and The Rim of Space

Before Gene Roddenberry and George Lucas, the science fiction writers of the 1950s and 1960s were writing some of the hippest genre literature of the era. Here are three imaginative novellas from some of these pioneers of pulp science fiction.
Here are three more stories from the pioneers of the early days of pulp science fiction in this final volume of the Galaxy Trilogy series.
Across Time by David Grinnell. Unidentified flying objects are closing in fast, but Captain Zachary Halleck doesn't finalize his move to protect the secret Air Force research station. Why?
Mission to a Star by Frank Belknap Long. Humanlike aliens land on Earth and claim that they come in peace, asking for only complete freedom and Earth's friendship, trust, and understanding for as long as they choose to remain.
The Rim of Space by A. Bertram Chandler (This is volume one of the Rim World series.) The Rim Runners explore desolate planets inhabited by intelligent amphibians, tea-loving lizards, humanoids, and a pre-industrial civilization in this first book in the Rim World series.

Galaxy Trilogy, Volume 4: Across Time, Mission to a Star, and The Rim of Space