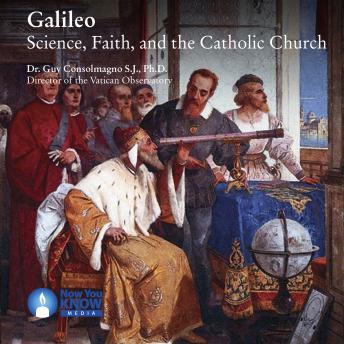 What can Galileo's extraordinary life and profound legacy teach us today?

Galileo's story is a touchstone in debates about science and religion, but our preconceptions inevitably color the way we see the issues. To understand who Galileo was, what he accomplished, and what you can learn from his triumphs and failures, you need a great teacher to place him in context by exploring the cosmologies, political and religious and historical events, and famous people of his generation. You also need to get a sense of the man himself: from his family background and early ambitions to the person he grew into as he became a father, rising celebrity, literary lion, and ultimately an infirm but unbroken old man.

In Galileo: Science, Faith, and the Catholic Church, you will explore the context and implications of the Galileo affair-the events that culminated in his condemnation by the Roman Catholic Church. You can take no better guide than Dr. Guy Consolmagno, a renowned astronomer, Jesuit brother, and popular writer.

The Galileo affair resonates with our own times. Although the debate about an earth or sun-centered universe is long past, the ways we react to new ideas hasn't changed at all. All of the hopes, fears, and misunderstandings that surrounded Galileo and his opponents, we still face today in our encounters with science and religion.

By spending time with Galileo and his story, you will enrich your own faith and increase your understanding of science and religion.

This title is due for release on April 2, 2015
We'll send you an email as soon as it is available!