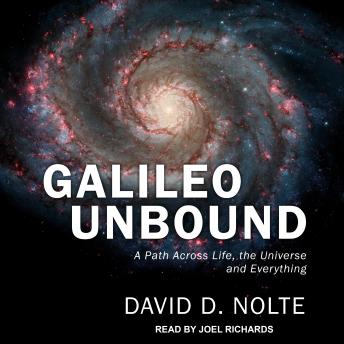 Galileo Unbound: A Path Across Life, the Universe and Everything

Galileo Unbound traces the journey that brought us from Galileo's law of free fall to today's geneticists measuring evolutionary drift, entangled quantum particles moving among many worlds, and our lives as trajectories traversing a health space with thousands of dimensions. Remarkably, common themes persist that predict the evolution of species as readily as the orbits of planets or the collapse of stars into black holes. This book tells the history of spaces of expanding dimension and increasing abstraction and how they continue today to give new insight into the physics of complex systems.

Galileo published the first modern law of motion, the Law of Fall, laying the foundation upon which Newton built the first theory of dynamics. Early in the twentieth century, geometry became the cause of motion rather than the result when Einstein envisioned the fabric of space-time warped by mass and energy. Possibly more radical was Feynman's dilemma of quantum particles taking all paths at once-setting the stage for the modern fields of quantum field theory and quantum computing. Yet as concepts of motion have evolved, one thing has remained constant, the need to track ever more complex changes and to capture their essence, to find patterns in the chaos as we try to predict and control our world.

Galileo Unbound: A Path Across Life, the Universe and Everything