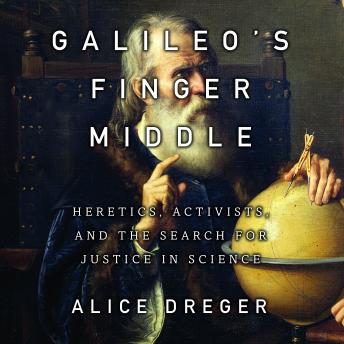 Galileo's Middle Finger: Heretics, Activists, and the Search for Justice in Science

A powerful defense of intellectual freedom told through the ordeals of contemporary scientists attacked for exploring controversial ideas, by a noted science historian and medical activist

An investigation of some of the most contentious debates of our time, Galileo's Middle Finger describes Alice Dreger's experiences on the front lines of scientific controversy, where for two decades she has worked as an advocate for victims of unethical research while also defending the right of scientists to pursue challenging research into human identities.

Dreger's own attempts to reconcile academic freedom with the pursuit of justice grew out of her research into the treatment of people born intersex (formerly called hermaphrodites). The shocking history of surgical mutilation and ethical abuses conducted in the name of "normalizing" intersex children moved her to become a patient rights' activist. By bringing evidence to physicians and the public, she helped change the medical system.

Galileo's Middle Finger: Heretics, Activists, and the Search for Justice in Science