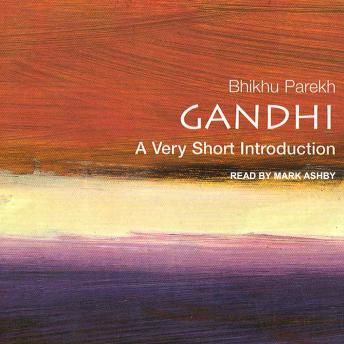 Mohandas Karamchand Gandhi (1869-1948) was one of the few men in history to fight simultaneously on moral, religious, political, social, economic, and cultural fronts. During his time as a lawyer in South Africa he developed his strategy of non-violence: the idea of opposing unjust laws by non-violent protest. He led the Indian National Congress party in three major campaigns against British rule, each culminating in his arrest.

In Gandhi: A Very Short Introduction, Bhikhu Parekh outlines both Gandhi's major philosophical insights and the limitations of his thought. Written with extensive access to Gandhi's writings, Parekh looks at Gandhi's cosmocentric anthropology, his spiritual view of politics, and his theories of oppression, non-violent action, and active citizenship. He also considers how the success of Gandhi's principles were limited by his lack of coherent theories of evil, and of state and power. Gandhi's view of man as ascetic allows no room for expressions of the cultural, artistic, or intellectual. Furthermore, he was so hostile to modern civilization that he was unable to appreciate its complex dialectic or offer a meaningful narrative. Nevertheless, Gandhi's life and thought had an enormous impact on the Indian nation, and he continues to be widely revered-known before and after his assassination as Mahatma, the Great Soul.