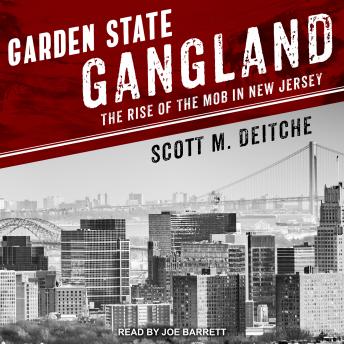 Garden State Gangland: The Rise of the Mob in New Jersey

The Mafia in the United States might be a shadow of its former self, but in the New York/New Jersey metro area, there are still wiseguys and wannabes working scams, extorting businesses, running gambling, selling drugs, and branching out into white collar crimes. And they are continuing a tradition that's over 100 years old. Some of the most powerful mobsters on a national level were from New Jersey, and they spread their tentacles down to Florida, across the Atlantic, and out to California. And many of the stories have never been told. Deitche weaves his narrative through significant, as well as some lesser-known, mob figures who were vital components in the underworld machine.

New Jersey's organized crime history has been one of the most colorful in the country, serving as the home of some of the most powerful, as well as below-the-radar, mobsters in the Country. And though overshadowed by the emphasis on New York City, the mob and New Jersey have, over the years, become synonymous, in both pop culture and in law enforcement.

Garden State Gangland: The Rise of the Mob in New Jersey

This title is due for release on December 16, 2017
We'll send you an email as soon as it is available!