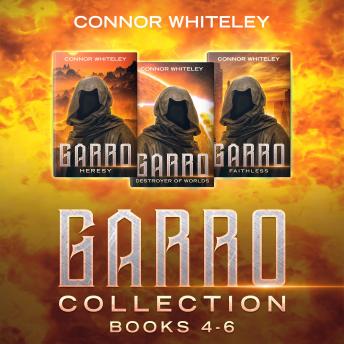 The Galaxy is burning.

Riots, slaughters, and assassinations are spreading like a plague throughout the Republic and nobody knows who or what is behind these attacks, but as these threats grow in intensity and as multiple high-profile figures are assassinated. Garro is dispatched to investigate.

However, as he explores this conspiracy more and more Garro discovers that nothing is as it seems!

As dead people return, friends become enemies and the match is lit that will set the Galaxy aflame but can Garro stop the conspiracy before its true aim is fulfilled.

With the Galaxy burning and besieged by the heretics, Garro has been deemed a heretic by his own Order and the Republic, he is alone. He is Faithless. He is nothing.

However, with Kortana hunting a weapon to end the galaxy, Garro must push on but when his hunt leads him into the hands of the God Magi’s magic hating Inquisition. Garro must quickly figure out a way to survive and prove that he is not a heretic.

The God Magi’s forces may be pushed back but they are not defeated so they prepare themselves for a final stand, but when the God Magi learns the location of the Supreme Grand Master, she is determined to end him. Yet does Jeremy know of this and if so what waits for the God Magi at this mysterious location?

Meanwhile, with Kortana and Garro knowing the location of the Virus, it’s a race against time before Kortana uses the Virus to end all life. But does she have another plan for the Virus?

Whatever happens, Garro and his allies must learn the truth about what’s actually going on in the universe before the unthinkable happens and the Galaxy is changed forever!

This audiobook is a perfect listen whilst you commute, exercise, do the housework and more.