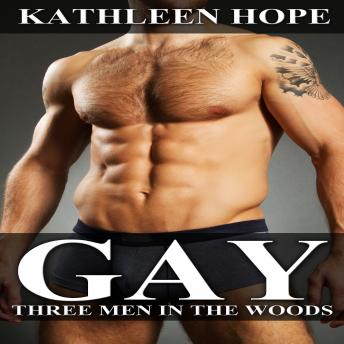 Gay: Three Men in the Woods

'Yes.'Seth gasped, suddenly aware of how very true it was.

Eli's lips were bitten, soft and pink, his pout wanton. Seth looked him over, filled with a hunger he hadn't previously recognized. He felt lucky he wasn't drooling when he got to his feet, abandoning his little standoff with Luke. That's why he'd known from the beginning he would lose. He was easily tempted.

Seth's hands gripped Eli's loose jeans at his hips, spinning him around and pushing him back against Luke. Eli grinned a pretty grin, pleased when the maneuver landed him right in Luke's lap. He made a satisfied groan when he ground his ass against Luke's erection, causing the stoic man to throw his head back with a deep, guttural noise. Luke was still sitting up, though, his hands planted firmly on his knees like he wasn't even aware of the...

Gay: Three Men in the Woods

This title is due for release on July 2, 2017
We'll send you an email as soon as it is available!