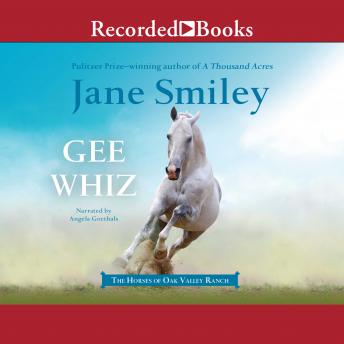 Gee Whiz is a striking horse, and only part of that is because of his size. He is tall, but also graceful, yet his strides big but precise. At the same time, he keeps his eye on things, not as if he's suspicious, but as if he's curious. When Abby is confronted with an onslaught of reminders of just how little of the world she has seen, she finds herself connecting with Gee Whiz's calm and curious nature, and his desire to know more. Her brother receives a draft notice to Vietnam, her friends return for the holidays with stories from their boarding school in Southern California, and the wise, lovable Brother Abner opens her eyes with tales of his many years spent traveling. At the same time, her beloved Jack and True Blue are both faced with opportunities to broaden their horizons away from the ranch. Will she let them go, with hopes that she might one day do the same?