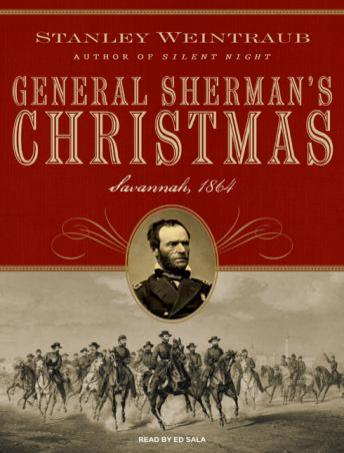 General Sherman's Christmas opens on Thanksgiving Day, Thursday, November 24, 1864, one month before Christmas. Sherman was relentlessly pushing his troops across Georgia, reaching Savannah days before Christmas. His methodical encroachment of the city from all sides eventually convinced Confederate general W. J. Hardee to slip away in darkness across an improvised causeway toward South Carolina to the north. In freezing rain and terrifying fog, soldiers with their equipment crossed an improvised pontoon bridge across the mile-wide Savannah River.

Three days before Christmas, the mayor, Richard Arnold, surrendered the city, populated now mostly by women and children and slaves who had not fled. Then General Sherman telegraphed to Abraham Lincoln, 'I beg to present you as a Christmas-gift the city of Savannah.' The end of the long war was in sight.

The siege of Savannah took place as its inhabitants were preparing for Christmas, and Stanley Weintraub explores what remained of the holiday in the South by the last full year of the war. On Christmas Eve, the 33rd Massachusetts Regiment band serenaded Sherman and 'a constant stream' of freed slaves filed by the house he had taken over for his headquarters. That he had come at Christmas was immensely symbolic to them.

Including the voices of soldiers and civilians on both sides of the conflict, General Sherman's Christmas is the perfect holiday present for the history buff.