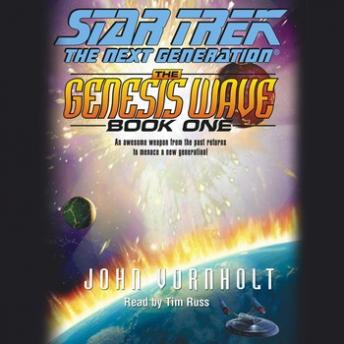 'As a Matter of cosmic history, it has always been easier to destroy than to create.'
-- Spock, Star Trek® II: The Wrath of Khan™
Intended to create life from nothingness, the Genesis Device had the potential to become a weapon of awe-inspiring destructiveness, capable of rearranging matter and life energy on a planetary scale. After the cataclysmic explosion of the Genesis Planet, and the Klingon Empire's attempt to steal the top-secret technology for its own military purposes, Starfleet wisely decided to destroy all data and records on Project Genesis, hoping to bury its deadly secrets forever.
Nearly a century later, all that remains of Genesis is the knowledge stored in the mind of an elderly, almost-forgotten scientist named Dr. Carol Marcus. But Dr. Marcus has gone missing, and a menace from bygone days has come rushing back with a vengeance.
Sweeping across the Alpha Quadrant at a terrifying speed, a mysterious wave of energy is wiping out populations of entire planets. The Starship Enterprise™, commanded by Captain Jean-Luc Picard, is the first Starfleet vessel to discover the threat. Billions of living beings and hundreds of inhabited planets lie in the path of the mutagenic wave. Earth and the Romulan Empire face total obliteration.
To discover the origin of the wave, Picard and his crew must probe the long-buried mysteries of the past. But even if he can uncover the shocking history of the Genesis Wave, is there any way to save the future from its unleashed fury?