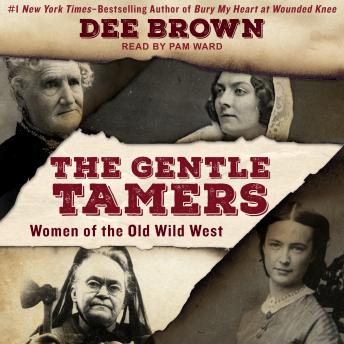 The Gentle Tamers: Women of the Old Wild West

Popular culture has taught us to picture the Old West as a land of men, whether it's the lone hero on horseback or crowds of card players in a rough-and-tumble saloon. But the taming of the frontier involved plenty of women, too-and this book tells their stories.

At first, female pioneers were indeed rare-when the town of Denver was founded in 1859, there were only five women among a population of almost a thousand. But the adventurers arrived, slowly but surely. There was Frances Grummond, a sheltered Southern girl who married a Yankee and traveled with him out west, only to lose him in a massacre. Esther Morris, a dignified middle-aged lady, held a tea party in South Pass City, Wyoming, that would play a role in the long, slow battle for women's suffrage. And young Virginia Reed, only thirteen, set out for California as part of a group that would become known as the Donner Party.

With tales of notables such as Elizabeth Custer, Carry Nation, and Lola Montez, this social history touches upon many familiar topics-from the early Mormons to the gold rush to the dawn of the railroads-with a new perspective. This enlightening and entertaining book goes beyond characters like Calamity Jane to reveal the true diversity of the great western migration of the nineteenth century.