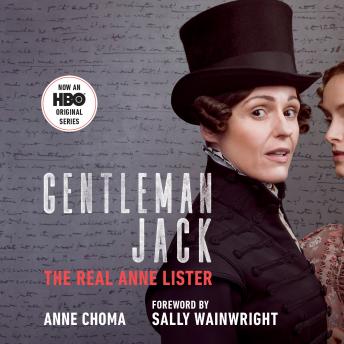 In 1834, Anne Lister made history by celebrating and recording the first ever known marriage to another woman. This is her remarkable, true story.

Anne Lister was extraordinary. Fearless, charismatic and determined to explore her lesbian sexuality, she forged her own path in a society that had no language to define her. She was a landowner, an industrialist and a prolific diarist, whose output has secured her legacy as one of the most fascinating figures of the 19th century. Gentleman Jack: The Real Anne Lister follows Anne from her crumbling ancestral home in Yorkshire to the glittering courts of Denmark as she resolves to put past heartbreak behind her and find herself a wife. This biographical portrait introduces the real Gentleman Jack, featuring unpublished journal extracts decrypted for the first time by series creator Sally Wainwright and historian Anne Choma.

'Anne Choma's Gentleman Jack is not just a tie-in to the TV series, but a probing and page-turning study of legendary diarist Anne Lister, full of original insights and freshly decoded material from the 1830s period of Lister's hunt for a wife.' -Emma Donoghue, New York Times bestselling author of Room