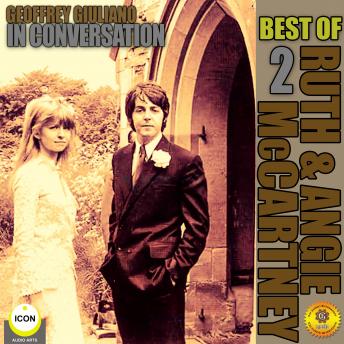 Angela McCartney was born in Liverpool, as you might expect, in November of 1929. She married her first husband in 1956 and her daughter, Ruth, was born in 1960. Angie was widowed in 1962 after her husband was in a tragic car accident. Two years later she became acquainted with a lonely widower by the name of Jim McCartney.
Jim was a retired cotton salesman and one time local band leader who also shared the distinction of being the father of Paul McCartney The couple were married in 1964 with Jim adopting Angie's little girl. Together with Jim until his death in 1976, Angie and Ruth were witness to pretty much all of the exciting, turbulent Beatles years.
Along the way both ladies formed deep relationships with not only Paul, but also his brother Mike McGear, all of the Beatles and their wives, as well as a host of other prominent people of the day. To enter into a family as close knit and headstrong as the McCartney clan, however, was often tough going - not withstanding the ever present pressure as the family of Beatle Paul and the madness which swirled around those lucky, or perhaps more appropriately, fated to be part of his exclusive inner circle.
Angie not only looked after Ruth and Jim, but also helped out at the Beatles office, event planning and later, in 1976, starting the fan club for Paul's second incarnation pop group, Wings. For Ruth, being the kid sister of the sexy Paul was first a thrill and later a challenge. At school she was teased and sometimes even bullied because of her famous family.
Following Jim McCartney's death from complications of arthritis in the late '70s, Ruth and Angie's relationship with Paul soured and they were soon on their own. The two moved to London in search of a new life but nothing much happened and they drifted through a succession of gigs in Australia and Nashville.
Music by AudioNautix.