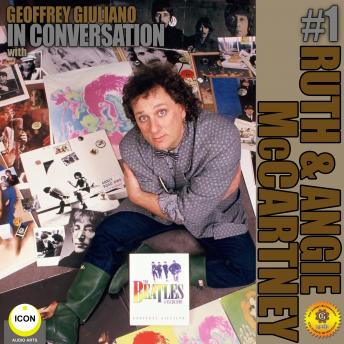 Geoffrey Giuliano In Conversation with Ruth and Angela McCartney, Volume 1

Episode 1: Angie's early life. A piano teacher at 14. The death of Ruth's dad. Meeting Jim McCartney's father. Secrets of the extended McCartney family. Angie and Ruth move into Rembrandt on November 17, 1964. Paul drives from London to meet his new family.
First impressions of Beatle Paul. The 28 year age difference between Jim and Angie. Ruth spends time with her new big brother. Macca is a very careful driver. The wedding Ruth did not attend. The press camps out in the garden. Jim did not own his own home - Paul did. Weird Beatles fan mail. Working with good old Freda Kelly.
The mad fan who mailed herself from Texas. Meeting Mike McCartney. A rough start between Angie and Mike. McGear's first marriage. On Jane Asher. Ruth's school days. Meeting the Beatles Xmas 1964. On Alma Cogan. Paul hangs out with Ruth. On Peter and Gordon.
Jane Asher's father kills himself. Jim McCartney - crossword king of Liverpool. Mrs. Asher taught music. What does Geoffrey think of Angie's and Ruth? January 1965. A trip to meet the Beatles in the Bahamas.
Music by AudioNautix.

Geoffrey Giuliano In Conversation with Ruth and Angela McCartney, Volume 1