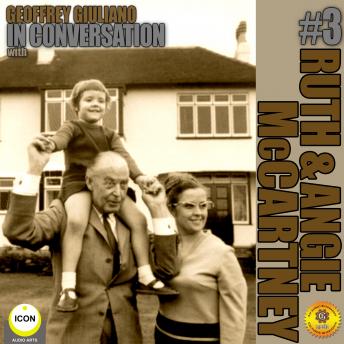 Geoffrey Giuliano In Conversation with Ruth and Angela McCartney, Volume 3

Episode 3: How Russia regards the ladies relationship with Paul. Ruth's impressions of the press. Touring Russia. Pop diva Ruth has her own billboard in Russia. Ruth in space! Bathing in snow in the arctic circle. Beatle Paul is arrested for farming pot in Scotland. Jim goes mad. Macca advocates the legalization of weed in the Times. Dealing with their relationship with Paul. McCartney's Swedish drug bust. On the death of George's mum Louise. The McCartneys are moral cowards. Ruth rides horses with Heather McCartney. Heather go to the bathroom! Ruth opines on Paul's music - not a fan. Paul will not did deep into his emotions thus his music suffers. "Trite pop crap! " Jim's profound disappointment in Paul. Angie's no Beatles fan. John was the backbone of the Beatles. Paul and Prince? Paul was not really close to his dad. Paul bought the Robbins a shop. Mr. McCartney was on a meager monthly budget from Paul. Paul paid just half of Aunty Milly's nursing home bill. Ruth and Julian Lennon. Jamming with Keith Moon, Rod Stewart, Cat Stevens, Ryan O'Neil, Mark Bolan and Elton John in London. Mike McGear would cover for Paul even if he murdered someone. Paul is not dead - but he did crash his motorbike. On Tara Brown and his wife (she did not recall her own child's name!). On Mick Jagger circa 1967. Paul does not challenge himself. Linda did not feed her family properly so Jim and co used to sneak food at night. Paul forgets Jim's birthday. The star studded funeral of Brian Epstein. LuLu loses her pants. The Beatles loved Brian. Ruth's real dad - not whom you think! Paul roughs up an old man at Lime Street Station. Linda is abusive to old Jim. Paul kicks the dog! A reporter cons his way into the house. Paul's a fairly decent carpenter. The day John Lennon died - Yoko is a flake. Paul orders Angie around. Paul was controlling.
Contains adult language and mature themes. Not recommended for children.
Dedicated to Vrndarani Devi 1953-2017
Produced by Fred Betschen

Geoffrey Giuliano In Conversation with Ruth and Angela McCartney, Volume 3