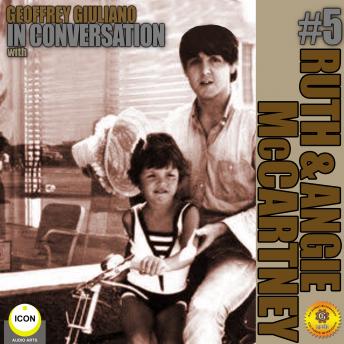 Geoffrey Giuliano In Conversation with Ruth and Angela McCartney, Volume 5

Episode 5: Candid thoughts on Paul's Liverpool family - it ain't pretty! Ruth cannot ever upstage Heather. Paul lashes out at Angie "Don't forget I put every crumb of food in your mouth." Paul would have not have been much in life were there no Beatles. Brian Epstein made the Beatles. Angie's final plea to Paul. Angie sold Paul's birth certificate. Macca is a musical hypocrite. Paul is unbalanced. The last time Ruth ever spoke to Paul - also not pretty! Macca suggests Ruth find a rich Arab. "You can't put the phone down on me I'm Paul McCartney." Ruth slams down the phone. Veggie Paul oppresses his roadies in Germany. Macca crew is locked in the gig so they would not go outside and buy meat. Ruth and Angie manage a traveling Elvis museum and hustle photos with Santa. A steaming long term affair with David Cassidy. Ruth is invited to try and sleep her way to the top. She declines. The girls relationship with Dudley Moore. Ruth falls in love. Ruth is a hit in Russia.
Contains adult language and mature themes. Not recommended for children.
Dedicated to Vrndarani Devi 1953-2017
Produced by Fred Betschen
Edited by Macc Kay
Music by AudioNautix.com
Project Coordinator Alex Franchi
For Icon Audio Arts
Brandon Stickney
Eden Giuliano

Geoffrey Giuliano In Conversation with Ruth and Angela McCartney, Volume 5