The Geography of Nowhere: The Rise and Decline of America's Man-made Landscape 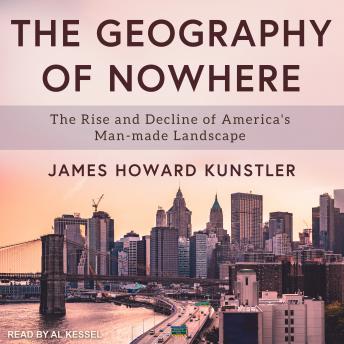 In elegant and often hilarious prose, Kunstler depicts our nation's evolution from the Pilgrim settlements to the modern auto suburb in all its ghastliness. The Geography of Nowhere tallies up the huge economic, social, and spiritual costs that America is paying for its car-crazed lifestyle. It is also a wake-up call for citizens to reinvent the places where we live and work, to build communities that are once again worthy of our affection. Kunstler proposes that by reviving civic art and civic life, we will rediscover public virtue and a new vision of the common good. 'The future will require us to build better places,' Kunstler says, 'or the future will belong to other people in other societies.'

The Geography of Nowhere has become a touchstone work in the two decades since its initial publication, its incisive commentary giving language to the feeling of millions of Americans that our nation's suburban environments were ceasing to be credible human habitats. Since that time, the work has inspired city planners, architects, legislators, designers and citizens everywhere.

Geography of Nowhere: The Rise and Decline of America's Man-made Landscape