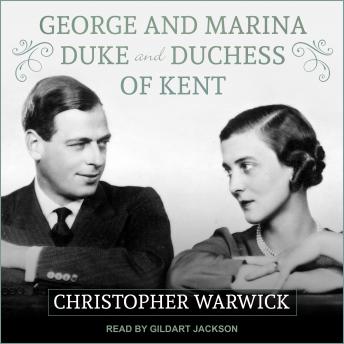 George and Marina: Duke and Duchess of Kent

For eight brief years, before he was tragically killed in a mysterious air crash during the Second World War, Prince George, Duke of Kent, son of King George V and Queen Mary, and his beautiful wife, Princess Marina of Greece and Denmark, were the British monarchy's, indeed, high society's, most glamorous royal couple; and as golden royal icons they are still remembered.

As a young man, voraciously addicted to drugs and sex, with men as much as women, marriage and parenthood for the impetuously wayward playboy prince, with his night-clubbing lifestyle and intimate liaisons, was seen as the only stabilizing influence. Enter the stylish and sophisticated Princess Marina, the cultured, artistic, and multilingual youngest daughter of Prince Nicholas of Greece and his Russian-born wife, Grand Duchess Yelena Vladimirovna. As Duke and Duchess of Kent, George and Marina were the Crown's most glittering representatives, not least in the aftermath of the abdication of George's adored elder brother, the briefly-reigned King Edward VIII; the man with whom he had not only shared both home and high-flying lifestyles, but who had helped cure him of his addiction to morphine and cocaine.

George and Marina: Duke and Duchess of Kent