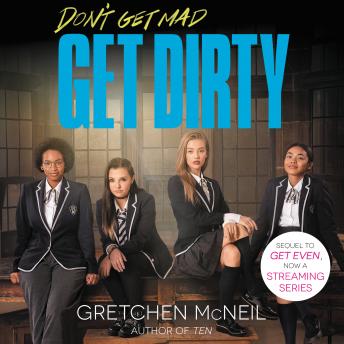 The Breakfast Club meets Pretty Little Liars in Gretchen McNeil's sharp and thrilling sequel to Get Even. Perfect for fans of E. Lockhart, Karen M. McManus, and Maureen Johnson.

The members of Don't Get Mad aren't just mad anymore . . . they're afraid. And with Margot in a coma and Bree under house arrest, it's up to Olivia and Kitty to try to catch their deadly tormentor.

But just as the girls are about to go on the offensive, Ed the Head reveals a shocking secret that turns all their theories upside down. The killer could be anyone, and this time he—or she—is out for more than just revenge.

The girls desperately try to discover the killer's identity as their own lives are falling apart: Donté is pulling away from Kitty and seems to be hiding a secret of his own, Bree is sequestered under the watchful eye of her mom’s bodyguard, and Olivia's mother is on an emotional downward spiral.

The killer is closing in, the threats are becoming more personal, and when the police refuse to listen, the girls have no choice but to confront their anonymous “friend” . . . or die trying.