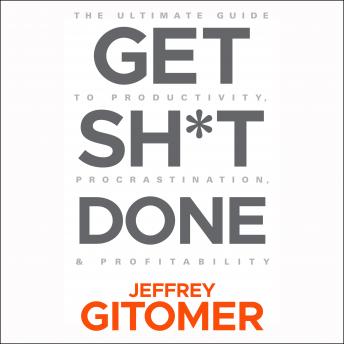 Get Sh*t Done: The Ultimate Guide to Productivity, Procrastination, & Profitability

The must-have guide for getting sh*t done!

Written for those who finds it hard to Get Sh*t Done, this book is designed to have a profound, life-changing effect on anyone who wants to adopt and implement the elements of greater productivity. New York Times bestselling author Jeffrey Gitomer explains why we are so often stymied by procrastination and reveals the strategies to achieve and profit more.

It’s really irritating how often he quotes himself.

The self quotations of the author in his own book was too much to make the book enjoyable. Hearing “Jeffery Dittomet” every 30 seconds ruined the entirety of each passage. Luckily this book was free because it’s really aimed at impotent salesmen…

I think if he skipped saying his name so many times it would have been much better.

Good information. Makes you think about your intentions and how that relates to time management.

Same as many have said, his incessant self-quoting was a major distraction and irritant to what was otherwise a fairly still and uninspired "be like me" book. Also the repeated attempts to direct you to his website and mailing list for things that could have been written and included in the book in half the time and effort left this book feeling like an early 90s website experience complete with flashing text in strange places. I've read and listened to a LOT of books in this area and this was by far the most painful to try and get through while simultaneously providing the fewest nuggets of useful information among the constant self-aggrandizing BS. Skip this title and this author and go read atomic habits for an actual good book on this material.

The majority of this book was a unorganized conglomeration of random productivity commentary with little actual advice. The book is filled with lists such as "The 10.5 characteristics of successful people" and "The 5.5 things to do daily." Every list included a bullet point that was ".5" with no explanation for why it was counted only has a half an item instead of a whole item. Prior to getting the book I read the other reviews about the author quoting himself and I thought the reviewers must have been exaggerating. They weren't. Several times the author quotes himself three or four times in less than 30 seconds. He must have quoted himself 200 times. None of the quotes were particularly insightful. It is almost as if the author picked random sentences to tag his name to in order to quote himself. Since he wrote the book, everything in it, with the exception of quotes from other people, is his own work therefore it isn't necessary for him to include the material as quotes. Quotes are to be used when you quote someone else to give them credit, not to quote yourself. The previous reviews were right; the constant quoting of himself was very distracting. About two-thirds the way through the book, it took a left turn into advice on sales: cold calling, call reluctance, targeting the right prospects, etc. Not only was the sales advice very basic, this was suppose to be a productivity book not a sales book. If you want a great book on productivity, try The One Thing by Gary Keller, The Four Disciplines of Execution by Chris McChesney and Sean Covey or Traction by Gino Wickman. As for the narration, my advice for the author is that if you have the voice of a grumpy old man then hire someone else to narrate your books.

Worst book I’ve read in a long time, possibly ever. Generic advice, author full of ego with constantly weaving in quotes by himself. This is terrible.

This was a good "kick in the pants"

Some useful tips and information. The narrator quoting his name so many times was irritating, though.

I wish he wouldn’t quote his own name over and over again. It was really annoying. The book was enjoyable except for that.

Quotes self way too much extremely annoying

There interesting things worth trying in it. Unfortunate, he is bragging a lot, you have to listen through all the sales stuff and he can be a bit long about the authors he likes

This nook is one of those books where there are so many truths but if you let small things distract you you will miss some valuable lessons. Get stuff done means to push through your tendencies to delay or focus on the unimportant and focus on the important stuff.

Meh. Doesn’t do you much good if you don’t have the materials that go with it.

Focus is on sales, book didn't make me want to get things done. Some cool aspects, though.

The book has redundant ideas in it. But also some key points that can help eliminate procrastination

The book is geared toward salesmen. Some good information. But some is not doable for most people i.e. putting post it notes on the bathroom mirror. It was also irritating to hear him say his own name repeatedly to take credit for his own "quotes" from his own book.

I can't help but cringe at the author consistently saying his name at the end of almost every sentence. They're not even quotes just simple statements. Found the book to be mediocre at best.

Does make you think and reconsider how you use your time. Guess you have to decide whether or not you want balance or just be constantly on the go achieving.

Spot on call to action. This will make you think about how spending time vs allocating time makes a difference. Listen to this book.