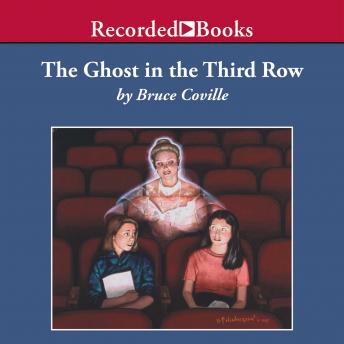 The Ghost in the Third Row

For sixth-grader Nina Tanleven, nothing is scarier than auditioning for a play at the famous old Grand Theater. But Nina changes her mind when she climbs on stage to audition-and sees a ghost sitting in the audience! Then, even stranger things happen. Scripts are ripped up, sets are knocked down, and everyone fears the ghost wants to stop the play. Everyone, of course, except Nina and her best friend Chris. They discover that fifty years ago, a gorgeous young actress was murdered on the Grand Theater's stage. According to legend, the actress has haunted the theater ever since. Nina and Chris think they know what her ghost wants-but it will take some spooky ghost hunting to prove it! Packed with fun-filled adventure and captivating mystery, Bruce Coville's delightful story starring Nina Tanleven-America's youngest ghostbuster-is a popular choice for young listeners.

This title is due for release on August 23, 2013
We'll send you an email as soon as it is available!