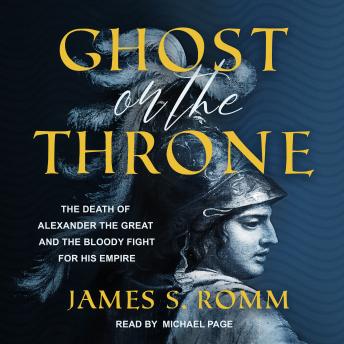 Ghost on the Throne: The Death of Alexander the Great and the Bloody Fight for His Empire

When Alexander the Great died at the age of thirty-two, his empire stretched from the Adriatic Sea in the west all the way to modern-day India in the east. In an unusual compromise, his two heirs-a mentally damaged half brother, Philip III, and an infant son, Alexander IV, born after his death-were jointly granted the kingship. But six of Alexander's Macedonian generals, spurred by their own thirst for power and the legend that Alexander bequeathed his rule 'to the strongest,' fought to gain supremacy. Perhaps their most fascinating and conniving adversary was Alexander's former Greek secretary, Eumenes, now a general himself, who would be the determining factor in the precarious fortunes of the royal family. James Romm, professor of classics at Bard College, brings to life the cutthroat competition and the struggle for control of the Greek world's greatest empire.

Ghost on the Throne: The Death of Alexander the Great and the Bloody Fight for His Empire