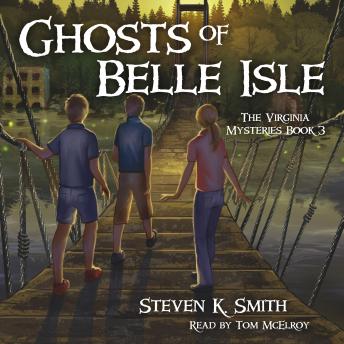 Ghosts from the Civil War seemed like just a legend until they saw the lights over the water.Brothers Sam and Derek can’t wait to explore historic Belle Isle during the 150th anniversary of the Fall of Richmond and the end of the Civil War. But that’s before they learn how the wooded park along the James River once held Union soldiers in a terrible prisoner-of-war camp. Legend says that the haunting lights over the rapids at night are the ghosts of long-dead soldiers still fighting the Civil War.

The discovery of a haunting mural in the island’s crumbling ruins leads the boys and their friend Caitlin into danger. To find the truth, they must brave menacing bullies and an encounter with a Confederate biker gang led by the notorious Mad Dog DeWitt. But some ghosts may be more alive than they ever expected. Join the kids as they face their fears across suspended bridges, secret hideouts, and graveyard ceremonies, while discovering names and places from the our country’s tumultuous past like Abraham Lincoln, Robert E. Lee, Jefferson Davis, Hollywood Cemetery, and Tredegar Iron Works.

Ghosts of Belle Isle is the third book in The Virginia Mysteries series, but it can easily be read as a standalone. If you enjoy mystery and adventure like the Hardy Boys, Nancy Drew, Magic Tree House, or National Treasure, you’ll love author Steven K. Smith’s exciting middle-grade series. The stories are modern-day fictional mysteries with twists of real locations and events from Virginia history. These fast-paced books are popular with both boys and girls ages 7-12, appealing to even reluctant readers!