The Ghosts of Cannae: Hannibal and the Darkest Hour of the Roman Republic 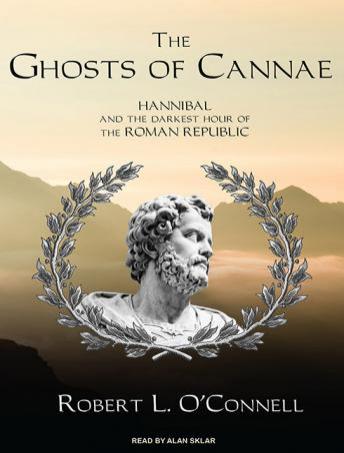 Hannibal's battle plan at Cannae became the mother of all great battle strategies-the first battle of encirclement that has been imitated (often to disastrous effect) endlessly over the past two thousand years. In this brilliant, long-overdue, and beautifully written account, Robert L. O'Connell gives listeners an epic account of one of the most dramatic battles of antiquity. The Ghosts of Cannae is at once a book about a specific battle (the massive defeat of a huge but inexperienced Roman army in southern Italy by Hannibal in 216 BC) but also an interpretation of the larger course of the Second Punic War, as well as an assessment of the historical impact of Rome's storied rivalry with Carthage. What ties the book together is the fate of the survivors, their treatment by the authorities in Rome, and ultimately their vindication nearly two decades later, when they defeated Hannibal at the decisive battle of Zama in North Africa. With an unforgettable cast of heroes and villains, The Ghosts of Cannae is history at its finest.

Ghosts of Cannae: Hannibal and the Darkest Hour of the Roman Republic