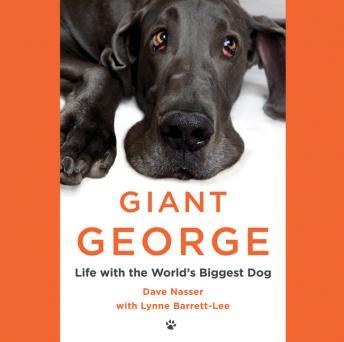 An 'engaging, humorous... and compelling story' of one couple's unexpected life with the 'runt of the litter' puppy who grew to be the largest dog... ever (Publisher's Weekly).
With his big blue eyes and soulful expression, George was the irresistible runt of the litter. But Dave and Christie Nasser's 'baby' ended up being almost five feet tall, seven feet long, and 245 pounds. Eager to play, and boisterous to the point of causing chaos, this big Great Dane was scared of water, scared of dogs a fraction of his size and, most of all, scared of being alone.
Giant George is the charming story of how this precocious puppy won Dave and Christie's hearts and along the way became a doggie superstar. In 2010, George was named by Guinness World Records as the Tallest Dog in the World-ever. He appeared on Oprah, and even has his own global fan club. But to Dave and Christie, this extraordinary animal is still their beloved pet, the one who has made them laugh, made them cry, and continues to make them incredibly happy.