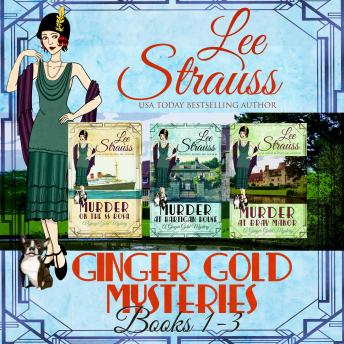 MURDER ON THE SS ROSA Murder's a pain in the bow!

It's 1923 and young war widow fashionista Ginger Gold makes a cross-Atlantic journey with her companion Haley Higgins to London England to settle her father's estate. When the ship's captain is found dead, Ginger is only too happy to lend her assistance to the handsome Chief Inspector Basil Reed. Whatever will she wear?

MURDER AT HARTIGAN HOUSE There's a skeleton in the attic!

After a weeklong passage over the Atlantic from Boston to Liverpool, Ginger Gold arrives at her childhood London home--Hartigan House--to find decade-old remains from some poor woman on the floor in the attic. Ginger's Boston terrier, Boss, noses out a missing phalange from under the bed. It's a mystery that once again puts Ginger alongside the handsome Chief Inspector Basil Reed. Who is the victim? And how did she end up in Ginger's home?

MURDER AT BRAY MANOR A poltergeist guilty of murder?

Ginger doesn't believe in ghosts, but is haunted nevertheless by memories of her husband and the lure of his gravesite she just can't bring herself to visit.

This title is due for release on July 31, 2022
We'll send you an email as soon as it is available!