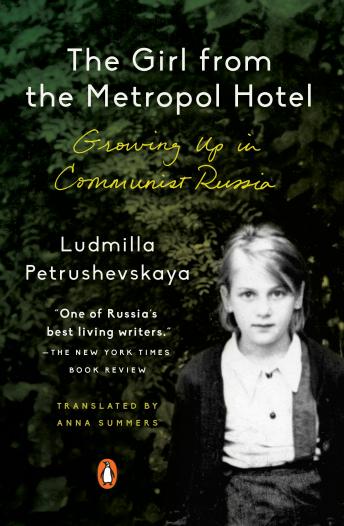 The Girl from the Metropol Hotel: Growing Up in Communist Russia

Finalist for the National Book Critics Circle Award for Autobiography

The prizewinning memoir of one of the world’s great writers, about coming of age as an enemy of the people and finding her voice in Stalinist Russia

Born across the street from the Kremlin in the opulent Metropol Hotel—the setting of the New York Times bestselling novel A Gentleman in Moscow by Amor Towles—Ludmilla Petrushevskaya grew up in a family of Bolshevik intellectuals who were reduced in the wake of the Russian Revolution to waiting in bread lines. In The Girl from the Metropol Hotel, her prizewinning memoir, she recounts her childhood of extreme deprivation—of wandering the streets like a young Edith Piaf, singing for alms, and living by her wits like Oliver Twist, a diminutive figure far removed from the heights she would attain as an internationally celebrated writer. As she unravels the threads of her itinerant upbringing—of feigned orphandom, of sleeping in freight cars and beneath the dining tables of communal apartments, of the fugitive pleasures of scraps of food—we see, both in her remarkable lack of self-pity and in the two dozen photographs throughout the text, her feral instinct and the crucible in which her gift for giving voice to a nation of survivors was forged.

“From heartrending facts Petrushevskaya concocts a humorous and lyrical account of the toughest childhood and youth imaginable. . . . It [belongs] alongside the classic stories of humanity’s beloved plucky child heroes: Edith Piaf, Charlie Chaplin, the Artful Dodger, Gavroche, David Copperfield. . . . The child is irresistible and so is the adult narrator who creates a poignant portrait from the rags and riches of her memory.” —Anna Summers, from the Introduction

Girl from the Metropol Hotel: Growing Up in Communist Russia