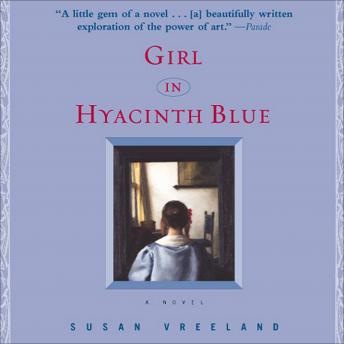 Picture this: "A most extraordinary painting in which a young girl wearing a short blue smock over a rust-colored skirt sat in profile at a table by an open window." Susan Vreeland imagined just such a humble domestic scene, suggested it was created in 17th-century Holland, and attributed it to Jan Vermeer. Then she wrote a beguiling novel about this canvas, which so closely resembles the 35 extant works of the Dutch master that it might as well be one of his--long, lost, finally found, and as exquisite as ever. The artistic journey Vreeland recounts begins in present-day Pennsylvania, where a schoolteacher claims he owns an authentic Vermeer, a legacy from his late father, who acquired it under heinous circumstances: a Nazi officer, the father had looted it from the home of Dutch Jews.Moving back in time and across the Atlantic, Vreeland traces the treasured painting from owner to owner. In doing so, she demonstrates the enduring power of art in the face of natural disaster, political upheaval, and personal turmoil. Ultimately, she ends the odyssey in Delft, where the painting's haunting subject is identified and tells her own poignant story about the picture's origins.Each of the eight linked chapters has an irresistible painterly quality--finely wrought, artfully illuminated, and subtly executed. Together, they constitute a literary masterpiece, one that the New York Times Book Review praised as "intelligent, searching, and unusual... filled with luminous moments; like the painting it describes so well."

This title is due for release on September 18, 2001
We'll send you an email as soon as it is available!