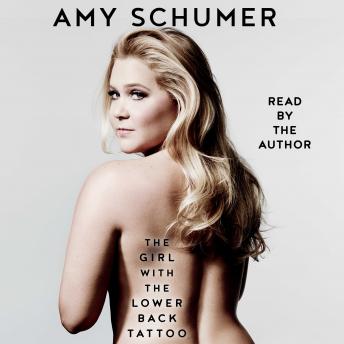 The Girl with the Lower Back Tattoo

'Amy Schumer's book will make you love her even more. For a comedian of unbridled (and generally hilarious) causticity, Schumer has written a probing, confessional, unguarded, and, yes, majorly humanizing non-memoir, a book that trades less on sarcasm, and more on emotional resonance.' —Vogue

'The Girl with the Lower Back Tattoo is an alternatingly meditative, sexually explicit, side-splittingly hilarious, heart-wrenching, disturbing, passionately political, and always staggeringly authentic ride through the highs and lows of the comedic powerhouse's life to date.' —Harper's Bazaar

'This is your happy hour with Amy Schumer...It's Bossypants meets Trainwreck meets your long weekend.' —TheSkimm

“Amy’s got your back. She’s in your corner. She’s an honesty bomb. And she’s coming for you.”
—Actress Tilda Swinton and Trainwreck co-star

The Emmy Award-winning comedian, actress, writer, and star of Inside Amy Schumer, Hulu's Life & Beth, and the acclaimed film Trainwreck has taken the entertainment world by storm with her winning blend of smart, satirical humor. Now, Amy Schumer has written a refreshingly candid and uproariously funny collection of (extremely) personal and observational essays.

In The Girl with the Lower Back Tattoo, Amy mines her past for stories about her teenage years, her family, relationships, and sex and shares the experiences that have shaped who she is—a woman with the courage to bare her soul to stand up for what she believes in, all while making us laugh.

Ranging from the raucous to the romantic, the heartfelt to the harrowing, this highly entertaining and universally appealing collection is the literary equivalent of a night out with your best friend—an unforgettable and fun adventure that you wish could last forever. Whether she’s experiencing lust-at-first-sight while in the airport security line, sharing her own views on love and marriage, admitting to being an introvert, or discovering her cross-fit instructor’s secret bad habit, Amy Schumer proves to be a bighearted, brave, and thoughtful storyteller that will leave you nodding your head in recognition, laughing out loud, and sobbing uncontrollably—but only because it’s over.

This book was brutally honest, Hilarious and painful to hear. Definitely a great listen. Keeps your attention and makes a hard day a little easier. Don’t listen with your kids around and use earbuds at work. I wish every author could be so raw and willing to share the ups and downs, and ins and outs of their lives. Would listen again.

I wasn't sure if I though A.S. was too crass for my liking..... but I couldn't have been more wrong. That obvioulsy is a character..... A.S. IS such a thoughtful badass hysterical comedian and a beautiful human being. Her book made me laugh my ass off, think deeply about my life and have gratitude for A.S's take on the world. Great read........Everyone should read this book/

I wasn't thrilled about the how it was read or the way it flowed. I'm. Proud of her in many ways and she's overcome many things and seems to be in a good spot in her life but it felt like she was always trying to be too profound and i found it to be like each sentence was going to be her last of that chapter. I don't know how to explain it. But it's like as if I wrote a book and That would turn out Terrible except to myself.

loved it so much

I love how brutally honest this book was I love how she reflects over her life. I’m a even bigger fan after the book

I can't wait to read Amy's next book! It's a must read. Enjoy.

So many emotions listening to this book!!! She is so real and holds nothing back!!! I love it!!

Ok so I literally worked through my whole day listening to Amy's book and was impressed. I laughed I cried I think I felt alot of emotion, but mostly the book was just a great listen. I like that I related to alot of what she said but could never actually say it the good and the bad lol well anyways kudos Amy and to anyone thinking about reading or listening I recommend listening better but I give it a full 5 stars.

A truly amazing read. Amy’s wit and personality truly shine through, in this comedic narration of the author’s compelling past, intricate present and hopeful future.

Really good read and I love that she's very open! She was too hard on herself and sometimes I found her whining a bit.. overall good read but can drag a bit.

Great listen.. funny and love that she narrated herself. Definitely recommend!

Amazing Schumer. So true to herself and its very refreshing !

Absolutely loved it! Nothing like I thought it was going to be. Would recommend it to everyone.

Maybe it's because I'm an emotional basket case at this moment in my life, but, this book made me laugh, cry, and feel. All the feels. I wish Amy Schumer was my friend. Lovved it! xo.

This was truly a fascinating read. I was delighted that Amy Schumer was the narrator because she was truly able to capture the emotion behind every experience.

I knew nothing about Amy before listening! I am however trash for celebrity memoirs so I just had to listen. She's got such a pleasant reading voice and she's too funny! Love this app! I'm able to listen and use my phone or listen while driving, cooking, cleaning, etc.

Love this book, I didn't know it was possible to like her even more. I definitely recommend it!

Amazing first audiobook to listen too. Amy is absolutely captivating!

Insightful. Hilarious. Wildly inappropriate.I loved every bit of this.

Super fun, heartfelt, and well written. It felt like we were hanging out getting to know each other. I love ya - thanks for the good time.

I really enjoyed getting to know Amy because I think her comedy, and her show is awesome. I could relate to her experience a lot as a "fellow woman", it made me think about self esteem, and my life in a different light. Amy is brilliant and so is her story in this book.

This is one of the best bios I have read In a while. I love it and recommend it.

I would have given a higher rating had she not sprinkled the book with random, unnecessary "F Bombs". They added nothing to the stories. I recently listened to an interview with Jerry Seinfeld where he said that many comics use foul language to get cheap laughs, but he doesn't do that because he holds himself to a higher standard, earning laughs the hard way. That said, I liked that the book had both funny stories, and serious lessons she's learned. I'd recommend this book if you don't mind the language.

I loved this book. The contents were a bit unexpected; alternating humour with tough issues. I listened to a lot of it with my 16 year old daughter during our drives and she enjoyed it as well.

This book tackles serious issues in some chapters (father/mother-daughter relationships, assault, consent, conjugal violence, vulnerability, childhood, gun violence, etc.) with a touch of humor. I don't think it was meant to be as funny as her stand ups or as silly as her show but its definitely a good funny read.

Very interesting and I enjoyed it. I loved that Amy did the narration.

An open and honest book about her life. I thoroughly enjoyed listening to Amy read her book.

While at times it could feel a little preachy, overall this was a fantastic book and a great listen. Amy touches on so many important issues, and as I made my way halfway across the country, I laughed out loud, I cried, and I related to a lot of her story. In many ways it was a coming of age story. Sometimes it felt a little too much like she was reading rather than speaking, and there was more name-dropping than I can relate to, but overall this was a meaningful book written at an important time for women. I'm glad Amy has weaned herself of all those mindless women's magazines and I wish more of us would follow suit!

The book was funny but she got monatoned sometimes. I would space out.

Thank you Amy for writing about so many issues that many women, including myself, have faced. The book is a delicate balance of humor and hard hitting issues. I thought it was written brilliantly and I have a new respect for Amy. I loved it.

I loved it. Hilarious book. She made me laugh and cry. Amy doesn't sugarcoat anything.

Amy is hilarious and this audiobook had me crying with laughter. It is relatable, honest and no one could have done a better job narrating.

Loved this book. Very true to Amy Schumer. Very comedic and entertaining! Would highly recommend for someone who just needs a laugh.

Funny and touching. I love Amy Schumer even more now!!

Save your money and your time, unless you are interested in hearing this "raunchy" comic throw a pity party for herself. I couldn't believe the intensity in some of these chapters. There is also a multitude of inconsistencies regarding her beliefs and personal relationships with people, which proves most likely that some of this book is pure embellishment. I read this book because I was obsessed with Amy as a comic! I loved her and couldn't get enough. I disliked this book so much so, that I don't think I'll ever watch another standup of Amy. To me, I've read too much. I know now, that her whole show is a complete fallacy and in-genuine. Sorry Amy, you lost me on this one. Stick to comedy.

Really loved this book and loved that Amy read it. It felt personal and relateable. i laughed and cried. I would absolutely recommend it to all of my ladies!

So entertaining. I laughed and cried and related to so many of the stories I was surprised. Amy, you are one tough chick with wisdom beyond your years. Proud and glad to be in the sisterhood with you!

I like Amy Schumer, but I hate this book. Sophomoric and poorly written, as if written by a 12 year old Amy. Just uninspired and unimportant.

If you enjoy Amy Shumer then you will enjoy this! Absolutely hilarious and unapologetically real. Everyone should read this!

Amy is brilliant. She also happens to be funny, and she has important things to say. This audio book is an absolute pleasure.

Fantastic book. I get it. Thanks for the laughs and thank you for sharing your life. I love how you are open with your vulnerability and that you swear without apologizing. You are real and identifiable. Thank you

I was so surprised at the range that this book had. It brought up serious topics, yet was still comedic when it needed to be. My favorite parts were when she read a diary entry from her college years and commented on them using today's knowledge. I have to say I was hysterically laughing on my long car ride! Would definitely recommend!

I just love Amy, I relate to her and she says everything I would love to say!

Very entertaining and interesting to hear about her life and experiences. I even chuckled out loud.