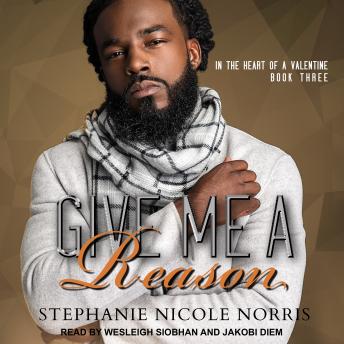 Give Me A Reason

#3 of In the Heart of A Valentine

Always the optimist, TV assignment editor Allison Sullivan makes no excuses about the enthusiastic life she leads. As doors of opportunity present themselves, whether in her profession, in her love life, or her friendships, Allison is one to take the task on full speed ahead. But when Allison meets the man she's investigated in person, the world around her seems to pause as she fumbles to recover from the dynamic energy that clings from him to her. She's never felt desire forge so deeply within, and the chance at a clandestine meeting raises the stakes on an ensuing love affair.

Award-winning film director Lance Valentine isn't looking for love, but in the midst of filming a new motion picture, he meets Allison Sullivan in an impromptu dinner at the home he was raised in. At first sight, her beauty takes his breath away, and he finds himself unable to explain the flutter in his heart or the battle in his spirit at the crescent curve of her smile. Career driven and focused on building his empire, Lance has never taken a chance on anything other than his creativity. Until Allison. While neither of them is looking for romance, they'll both soon find that an endless possibility of love is within their reach.