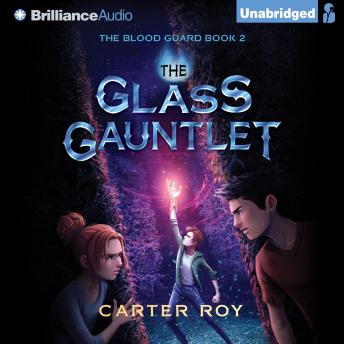 #2 of The Blood Guard

Ronan Truelove barely survived his first encounter with his father and the Bend Sinister. Now, he's determined to become one of the Blood Guard, a sword-wielding secret society sworn to protect thirty-six pure souls crucial to the world's survival.

Eager to prove he's got what it takes to become a Guard, Ronan can't believe that the first mission he, Greta, and Sammy are sent on is to visit a weird-sounding school and take a series of tests called the Glass Gauntlet. Paper and pencils and nerdy scholarship-where's the life-or-death challenge in that? Boring.

Only it's not. For the Glass Gauntlet turns out to be dangerous head-to-head competitions against ruthless opponents. Nothing and no one are what they seem to be. Who is good and who is evil? Who can he trust and who will kill him? Ronan has to figure it out fast, because his enemies are multiplying, and soon he will have to pass the ultimate test: facing his father again and standing up to those who threaten not only him and his friends, but the world.