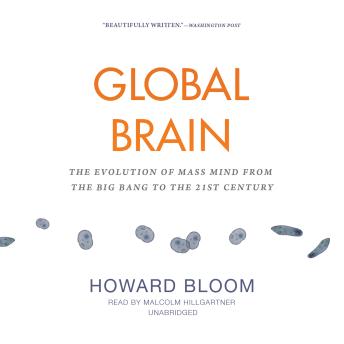 Global Brain: The Evolution of Mass Mind from the Big Bang to the 21st Century

In this extraordinary follow-up to the critically acclaimed The Lucifer Principle, Howard Bloom—one of today’s preeminent thinkers—offers us a bold rewrite of the evolutionary saga. He shows how plants and animals (including humans) have evolved together as components of a worldwide learning machine. He describes the network of life on Earth as one that is, in fact, a “complex adaptive system,” a global brain in which each of us plays a sometimes conscious, sometimes unknowing role. And he reveals that the World Wide Web is just the latest step in the development of this brain. These are theories as important as they are radical.

Informed by twenty years of interdisciplinary research, Bloom takes us on a spellbinding journey back to the big bang and then back to the present via surprising routes. Along the way Bloom shows us how culture shapes our infant brains, immersing us in a matrix of truth and mass delusion that we think of as reality.

Global Brain is more than just a brilliantly original contribution to the ongoing debate on the inner workings of evolution; it is a “grand vision,” says the eminent evolutionary biologist David Sloan Wilson, a work that transforms our very view of who we are and why.

“As someone who has spent forty years in psychology with a long-standing interest in evolution, I’ll just assimilate Howard Bloom’s accomplishment and my amazement.”—David Smillie, visiting professor of zoology, Duke University

Global Brain: The Evolution of Mass Mind from the Big Bang to the 21st Century