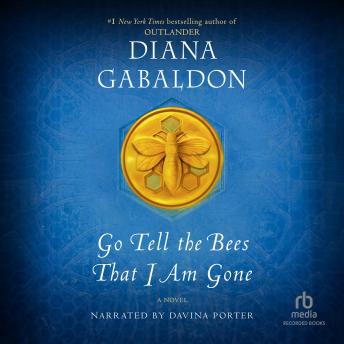 Go Tell the Bees That I Am Gone

The past may seem the safest place to be … but it is the most dangerous time to be alive. …Jamie Fraser and Claire Randall were torn apart by the Jacobite Rising in 1746, and it took them twenty years to find each other again. Now the American Revolution threatens to do the same.

It is 1779 and Claire and Jamie are at last reunited with their daughter, Brianna, her husband, Roger, and their children on Fraser’s Ridge. Having the family together is a dream the Frasers had thought impossible.

Yet even in the North Carolina backcountry, the effects of war are being felt. Tensions in the Colonies are great and local feelings run hot enough to boil Hell’s teakettle. Jamie knows loyalties among his tenants are split and it won’t be long until the war is on his doorstep.

Brianna and Roger have their own worry: that the dangers that provoked their escape from the twentieth century might catch up to them. Sometimes they question whether risking the perils of the 1700s—among them disease, starvation, and an impending war—was
indeed the safer choice for their family.

Not so far away, young William Ransom is still coming to terms with the discovery of his true father’s identity—and thus his own—and Lord John Grey has reconciliations to make, and dangers to meet … on his son’s behalf, and his own.

Meanwhile, the Revolutionary War creeps ever closer to Fraser’s Ridge. And with the family finally together, Jamie and Claire have more at stake than ever before.

Wonderful book. Took the story in so many places. I can't wait till the next one, (even though it will probalbly be years).

Fabulous continuation of this brilliant story and narrated so wonderfully. I couldn’t believe the ending and will probably have to listen to this book again when the next book in this series comes out. I ain’t complaining!

Great book and great read. The narrative is very well written and wonderful with historical context.

I can’t wait for Book 10, Diana’s characters and their story have comes to life off the pages. Davina’s reading enhanced the total experience.

The narrator is terribly difficult to understand , I do not know how is really the book …

As good as the first two books! As usual, Davina Porter is THE BEST narrator ever!

Loved it! Like visiting old friends. Can't wait till the next one

Love this book!! Can’t wait for the next

I fell in love with Outlander books when the pandemic hit and after watching the first couple seasons I found the books and sure anticipated this one coming out. Love Davina Porter as narrator and this is the longest series that I’ve followed as an adult. Hopefully there’ll be a few more.

Best book of the series. I do hope she brings it to good closure in purportedly the last book and before a decade has passed.

Loved it. I can't wait for the next one. I have read all of the Outlander series many times.

Much beloved series continues in this sweeping historical and romance filled novel. I will be heart broken when this series ends with the next book!

The narrator, Davina Porter is magnificent, flawless, excellent. I've been a long-time audio reader of Outlander and of all the series, this one has disappointed me terribly. It is INTERMINABLE, 50 hours long when wonderful is too short, for me this one can't end soon enough.

Can’t wait until her next book in the series!

Fantastic just like the others in this series. The narrator is on point!! Very well done overall.

I love Claire and Jamie and truly miss them when the book is done… brilliant as usual!!

Excellent as always! We look forward to the next book. This book seemed to be setting the stage for the next book. The narrator gets an A+! Diana is one of the most talented authors of all time.

oh my how I've waited for this book checking every month to see weather it had a release date. oh it was so worth it such wonderful writing. Even though it does seem like some of our characters resemble the characters from the TV series then the book series. I definitely don't mind and still love everyone of them.

As amazing as her others. I can't wait for the 10th and final book. Davina Portor is amazing as usual too even if she changed a few of the voices this time.

fantastic as all her books. I will listen again.

Great book, love theOutlander series, own all prior books of the seres and will buy yhis one when out in paperback to match the others.

One of her best!

Just as good as the rest of the Outlander series! Diana does not disappoint.

Love these books. I hate for them to end. It kills me to wait until the next book.

Another brilliant novel in the series by our beloved author Diana Gabaldon...

This title is due for release on November 23, 2021
We'll send you an email as soon as it is available!