Gods at Play: An Eyewitness Account of Great Moments in American Sports 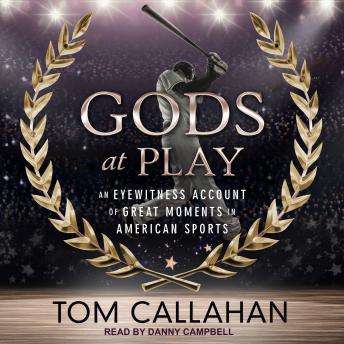 A beautifully observed narrative of American sport: character, grit, tragedy, unremarked heroism, and, always, the illuminating story behind the story.

As a columnist for Time magazine, among many other publications, Tom Callahan witnessed an extraordinary number of defining moments in American sport across four decades. He takes us from Roberto Clemente clinching his 3,000th, and final, regular-season hit in Pittsburgh; to ringside for the Muhammad Ali-George Foreman fight in Zaire; and to Arthur Ashe announcing, at a news conference, that he'd tested positive for HIV. There are also little-known private moments: Joe Morgan whispering thank you to a virtually blind Jackie Robinson on the field at the 1972 World Series, or Kareem Abdul-Jabbar saying he was more interested in being a good man than in being the greatest basketball player.

Brimming with colorful vignettes and enlivened by Callahan's eye for detail, Gods at Play offers surprising portraits of the most celebrated names in sports. Roger Rosenblatt calls Callahan 'the most complete sportswriter in America. He knows the most and writes the best.'

Gods at Play: An Eyewitness Account of Great Moments in American Sports