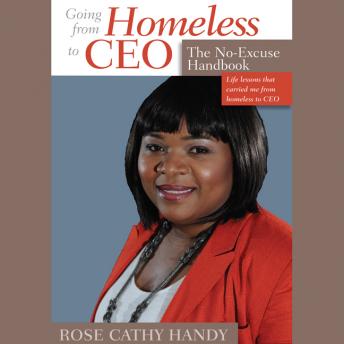 Going From Homeless to CEO: The No Excuse Handbook

Rose Handy had a great life with a good job, great boyfriend, and was nine months pregnant. Realizing too late that her boyfriend was pocketing the rent money and were now being evicted, the boyfriend left and Rose was forced into giving birth in a women's shelter. Angry, frustrated and embarrassed, she decided to fight back creating a company that will hit $1 million in 2010. The shelter provided Rose with a good environment in which she could take care of her newborn while also dealing with the trauma of what had happened to her. Rose was able to take advantage of the services that were made available to her in the shelter: counseling, education, and resources, while having a bed to sleep in and food to eat. Rose started her bilingual consultancy in the shelter. Today Rose's business has grown and she has run countless bilingual job fairs, helping to connect 16,000 people to jobs. Rose now teaches how to overcome adversity,anger and jealousy tocreate a successful and happy life.

Rose is from Cameroon and was voted Woman Entrepreneur of the
Year in Canada in 2009 and has found jobs for 16,000 people.

Going From Homeless to CEO: The No Excuse Handbook