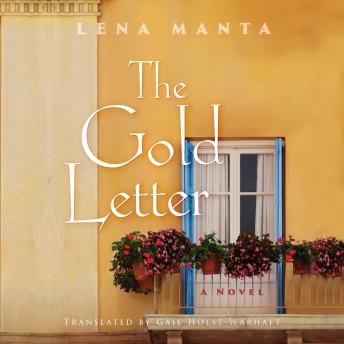 A cherished heirloom reveals the destinies of three generations of women in a powerful saga of lost love by the bestselling Greek author of The House by the River.
After years spent in Germany struggling to come to terms with a dispirited and abusive past, Fenia Karapanos has returned to her roots in Greece. Her estranged grandfather has bequeathed her his villa in Athens, a gesture she assumes is reparation for having disowned her late mother. After taking in a grateful Syrian refugee to help her restore the property—and her life—Fenia discovers a collection of love letters hidden under the floorboards, reaching back nearly a century. In each one, Fenia unfolds another piece of her broken family history.
But it’s Fenia’s solicitous cousin, Melpo, who offers more to the story than Fenia can imagine. Melpo shares everything she knows—about Fenia’s grandmother and mother, their elusive and heartbreaking searches for happiness, and two families linked across decades by betrayal, secrets, abandonment, and forbidden love. It upends everything Fenia believed was true about her family. But it could also draw her closer to finding self-fulfillment—and a place to call home.