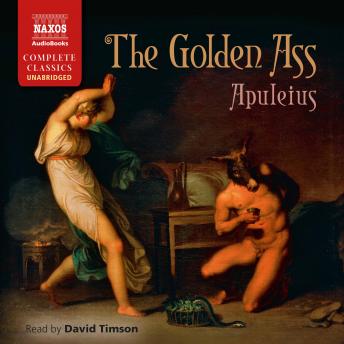 'In this hapless state I looked myself over and saw that I was now no bird, but an ass...' In this ancient picaresque adventure, Lucius, an insatiably curious young man, finds himself transformed into a donkey after his fascination with black magic and witchcraft goes awry. While trapped in his new body, he becomes the property of thieves, farmers, cooks, soldiers and priests, and observes the hypocrisy and ineptitude of Imperial Roman society...

The Golden Ass is considered the only novel to survive the Roman period, and the earliest novel to survive complete in the Western literary tradition. It is brimming with slapstick humor and sexual escapades, and foreshadows later works by Boccaccio, Rabelais, Cervantes and Chaucer, upon whom it was a direct influence.

 David Timson has directed, produced and read a great number of Naxos AudioBooks recordings, and undertaken this task with meticulous preparation. He is well versed in the history of ancient Rome, having read the complete Decline and Fall of the Roman Empire for Naxos AudioBooks. Translator: E. J. Kenney