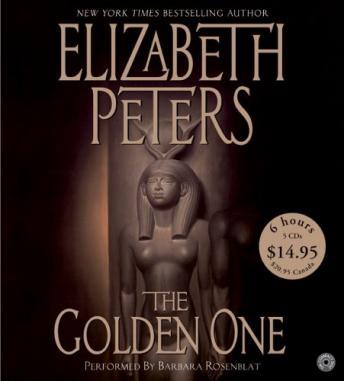 A new year, 1917, is dawning, and the Great War that ravages the world shows no sign of abating. Answering the siren call of Egypt once more, Amelia Peabody and her husband and son, Ramses, arrive at their home in Luxor to learn of a new royal tomb ransacked by thieves. Soon, a more disturbing outrage concerns the archaeologists: the freshly and savagely slain corpse of a thief defiling the ancient burial site.

Besieged by the British and defended by formidable Turkish and German forces, the fortified seaport of Gaza guards the gateway to the Holy Land. Answering a call he cannot refuse from British military intelligence, Ramses must journey to this ancient, fabled city to undertake a mission as personal as it is perilous. Death will surely be his lot if he is caught or exposed. Meanwhile, Ramses's wife, Nefret, guards a secret of her own...

I love Elizabeth Peters. Amanda Peabody and her family find almost as many recently-dead bodies in Egypt as other people find in tombs! While this isn't quite up to her usual fine level, it's more than passable. And it continues the saga of the foremost family of Egytology. If you haven't met Amanda, Emerson, Ramses, Nefret and the rest, it's past time!

I have read many Amelia Peabody books and have thoroughly enjoyed them. This one was mildly entertaining though not nearly as much as many of her others.

This title is due for release on April 5, 2005
We'll send you an email as soon as it is available!