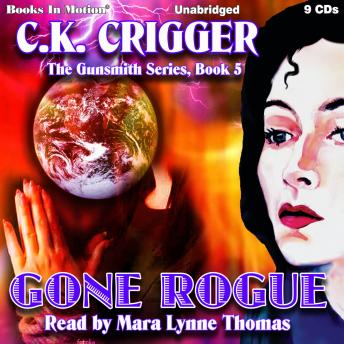 After a disastrous foul up in Boothenay's latest time-travel adventure, her long-time love, a traveler himself, has called their relationship quits. And, as if getting dumped isn't bad enough, she and her dog McDuff are inadvertently kidnapped, hijacked away to an alternate America that for all her extra abilities she never guessed existed. Boothenay soon finds herself embroiled in a strange mixture of family feud, political brouhaha and the fight over ownership of an immensely valuable energy source that powers everything from guns to airships in this world. But Boothenay's troubles aren't over yet. Apparently Bivet is the only one who can take her home, and now he's gone missing too, captured by Crowner forces. She teams up with Milo and Kellen, their troubles escalating as they're hounded by the enemy until finally, in a desperate battle between Crowners and Boothenay and the Tatrov brothers, the threesome rescues Bivet. However, now that Boothenay's way home is ensured, she's not so happy about leaving after all. She needs to know if something is growing between her and Kellen. And really, after her last adventure, it didn't appear her family was terribly glad when she turned up. A lot of problems-oh, call them troubles-appeared in the wake of her last time-traveling fiasco. Too much for her family to keep handling. Yet duty calls. When Bivet recovers from his wounds, he takes her back through the veil. As a precaution, he says he'll wait one hour. If all is well, this is the end of everything. Boothenay arrives home, only to find her father dead, her brother no longer welcoming. Now her first romance has fizzled out, nothing awaits her there that compares with old-time motor carriages, lightning spewing guns-and the enigmatic Kellen Tatrov.

This title is due for release on August 26, 2016
We'll send you an email as soon as it is available!