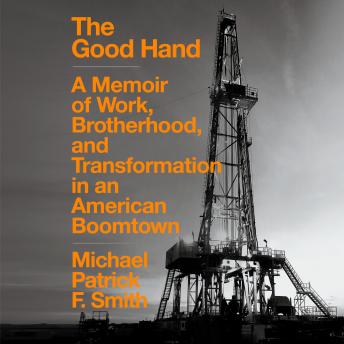 The Good Hand: A Memoir of Work, Brotherhood, and Transformation in an American Boomtown

'Remarkable . . . this is the book that Hillbilly Elegy should have been.' --Kirkus Reviews

Like thousands of restless men left unmoored in the wake of the 2008 economic crash, Michael Patrick Smith arrived in the fracking boomtown of Williston, North Dakota five years later homeless, unemployed, and desperate for a job. Renting a mattress on a dirty flophouse floor, he slept boot to beard with migrant men who came from all across America and as far away as Jamaica, Africa and the Philippines. They ate together, drank together, argued like crows and searched for jobs they couldn't get back home. Smith's goal was to find the hardest work he could do--to find out if he could do it. He hired on in the oil patch where he toiled fourteen hour shifts from summer's 100 degree dog days to deep into winter's bracing whiteouts, all the while wrestling with the demons of a turbulent past, his broken relationships with women, and the haunted memories of a family riven by violence.

The Good Hand is a saga of fear, danger, exhaustion, suffering, loneliness, and grit that explores the struggles of America's marginalized boomtown workers--the rough-hewn, castoff, seemingly disposable men who do an indispensable job that few would exalt: oil field hands who, in the age of climate change, put the gas in our tanks and the food in our homes. Smith, who had pursued theater and played guitar in New York, observes this world with a critical eye; yet he comes to love his coworkers, forming close bonds with Huck, a goofy giant of a young man whose lead foot and quick fists get him into trouble with the law, and The Wildebeest, a foul-mouthed, dip-spitting truck driver who torments him but also trains him up, and helps Smith 'make a hand.'

The Good Hand is ultimately a book about transformation--a classic American story of one man's attempt to burn himself clean through hard work, to reconcile himself to himself, to find community, and to become whole.


* This audiobook edition includes an original score and seven songs performed by The Good Hand.

Well worth the read. The author did a great job intermixing life events, current and past.