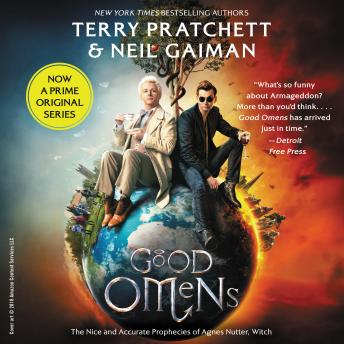 'Good Omens . . . is something like what would have happened if Thomas Pynchon, Tom Robbins and Don DeLillo had collaborated. Lots of literary inventiveness in the plotting and chunks of very good writing and characterization. It’s a wow. It would make one hell of a movie. Or a heavenly one. Take your pick.'—Washington Post

According to The Nice and Accurate Prophecies of Agnes Nutter, Witch (the world's only completely accurate book of prophecies, written in 1655, before she exploded), the world will end on a Saturday. Next Saturday, in fact. Just before dinner.

So the armies of Good and Evil are amassing, Atlantis is rising, frogs are falling, tempers are flaring. Everything appears to be going according to Divine Plan. Except a somewhat fussy angel and a fast-living demon—both of whom have lived amongst Earth's mortals since The Beginning and have grown rather fond of the lifestyle—are not actually looking forward to the coming Rapture.

And someone seems to have misplaced the Antichrist . . .

Another amazing story by Gaiman. The narrator brings life to the characters.

a great story...engulfing and enticing

Great book and the gentleman who read it did a great job with the voices. Really enjoyed this audiobook.

I was so glued to the story that I could not stop listening to it until the end. The end was so Neil Gaiman weird that I don't know what to say. I loved everything except for the end. I feel like something was missing. I bet the TV show will clear things up. It did with American Gods. I understood the book much better after watching the show.

Beautiful! This book walks a very careful line between sassy and sweet.

I have tried to listen to Terry pratchett before and didn't enjoy it very much, I did understand more of what was happen in this book ,but still think this style of book is not for me.

Enjoyable story. The person reading was fantastic. The characters really came to life.

Wonderful book! I would highly recommend this book!

I love Neil Gaiman and although he is known to be an established children's author, I would always read his stories prior to letting a young reader venture in. This book is no exception. It is a bit difficult to follow in places and it is always a shame when Gaiman does not read his own work as he is exceptional at conveying he characters personalities, it was still well read and entertaining.

This is a great book if you are looking for a comedy!

I listened to this on my 900-mile road trip to see family. Then one week later listened to it again on my return drive. So many passages I rewound over and over to laugh at them multiple times and marvel at the clever writing. Such rich, beloved characters from the most humble to the most evil. The narrator brought the characters alive with such skill...I'm in love with each of them. I can hear their voices in my mind still. Splendid!!!

Loved this story. So creative and hopeful!

Hilarious and an all around good time!

On the Book:: Good Omens tries to be a witty satire of life, of religion, and, especially, of Britain; yet, it is subpar on all three fronts. A better satire of life: Hitchhiker's Guide to the Galaxy. A better satire of religion: His Dark Materials trilogy. A better satire of Britain: Monty Python. The book shows how hard it's trying to be funny, falling into consistent patterns of (attempted) comedic punches. In line with the satire, but appropriate given the book's lackluster delivery of anything valuable besides a few charming sentences, there are no consequences to the story and so nothing is missed by not reading it. On the Narration:: The inflections and pacing were very well maintained, but the narration would have done well to have more distinct voices. There are several which are very well delivered and distinct in their own right, but some differences are significantly too subtle. While Martin Jarvis's strengths then may not be in the characters, he shines as narrator.

Funny. I enjoyed this book.

Talk about random and can’t make up its mind on telling a coherent tale. Story is all over the place, and constantly inserts inane and completely uninteresting side notes and frequently devolves into what they think are funny sudo facts thrown in, but are in fact, a complete waste of time, totally unfunny, and have nothing to add to the story. Good authors, big miss.