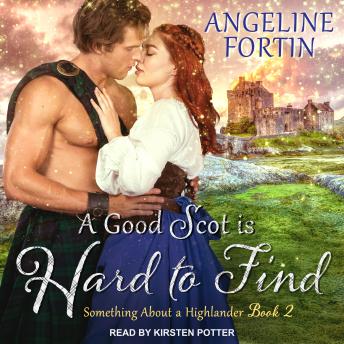 A Good Scot is Hard to Find

#2 of Something About a Highlander

Aila Marshall wants nothing to do with Auld Donell and his endless schemes, but even she cannot deny the lure of a mystery three hundred years in the making and a hunt for a lost treasure. When she's sent to the wrong time entirely, Aila knows she's been played. She knows she should return to her own time and give Donell a piece of her mind . . . On the other hand, what's the rush when an undeniably handsome Scot crosses her path?

Finn Keeley, Lord Rossmore, has no time for a new assistant. Especially one as sassy and bonny as the fiery redhead who'd come to fill the role. He's spent years waiting for the opportunity to avenge the death of his wife and not once has his determination wavered. He cannot let Aila divert him from his purpose now . . . even though she'd the most passionate distraction he's ever known.

As far as Aila Marshall was concerned, a good man was hard to find and love even harder. Fairy tales and white knights were nothing more than a myth. Despite her best friend finding a man in the past to steal her heart, Aila has no intention of following in Brontë's footsteps. She's content to indulge in the smoldering desire she shares with Finn while she solves her mystery. Nothing more. Until more is all Aila desires.