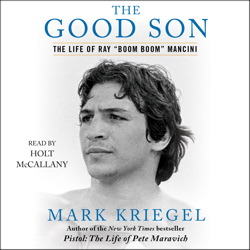 The Good Son: The Life of Ray 'Boom Boom' Mancini

From the bestselling author of Pistol and Namath, a vivid, revealing, and fast-paced biography of the great boxer Ray “Boom Boom” Mancini.

Frank Sinatra fawned over him. Warren Zevon wrote a tribute song. Sylvester Stallone produced his life story as a movie of the week. In the 1980s, Ray “Boom Boom” Mancini wasn’t merely the lightweight champ. An adoring public considered him a national hero, the real Rocky.

But it all came apart on November 13, 1982, in a brutal battle at Caesars Palace in Las Vegas. Mancini’s obscure Korean challenger, Duk Koo Kim, went down in the fourteenth round and never regained consciousness. Three months later, Kim’s despondent mother took her own life. The deaths would haunt Ray and ruin his carefully crafted image, suddenly transforming boxing’s All-American Boy into a pariah. With the vivid style and deep reporting that have earned him renown as a biographer, Mark Kriegel has written a fast-paced epic. The Good Son is an intimate history, a saga of fathers and fighters, loss and redemption.